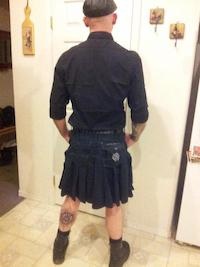 What happens when you wear Utilikilts to work? A submission from customer, Adam West.

“One day I decided to wear my kilt to work. Not the first time, but the first time the plant manager saw it. It was early in the morning and I was getting some coffee. He was standing in the break room when I walked in. He completely flipped out. He asked me what it was…seriously, no joke. I told him it was my kilt. He said I couldn’t wear it at work. I told him it’s part of my Scottish heritage and he had better tread lightly on this subject with HR being 2 doors down. (I’m not Scottish BTW) lol. He asked me if I brought any extra clothes. I asked him if he regularly brings extra clothes when he leaves for work, obviously not. He then told me to go change into my work coveralls. I replied, I’m not going commando in another man’s fatigues. At that point he spit out his coffee mid sentence. He turned white and completely speechless for a few minutes. He then instructed me to just go home. So… I filled out a time-card for 8 hours of OT and went home. And yes, they paid it. Well, the Christmas party was coming up in a month and I knew he couldn’t do shit about it there so I had a little surprise for him. The photos are me and my wife ready for the company Christmas party complete with my fresh tattoo. It was a big hit. Sadly though, the plant manager was “removed” before the party happened, but the HR manager was kind enough to send plenty of pics to his new address in Kansas. After that, there was never a problem. HR asked me several times if i wanted to make an official complaint. I always told them no. You don’t pick fights to prove a point. I got what I wanted. I had made my point and most were pretty cool about it. I know you probably get some good stuff from all over the world. But this happened in Seattle. Just 2 miles south of your 1st ave store at a place where I worked diligently for 10 years. I don’t know about you but I always root for the local underdog.”

← 18 Years in a Kilt The Newsletter Archive →

The Utilikilts Showroom is open for fittings and shopping! For Appointments, call 206-282-4226 Dismiss